I wrote in my introduction to this series of blogs about them ‘containing my ideas, thoughts, observations and helpful tools, based on my experience’. GAPS is one of those incredibly helpful tools.

In the late 90s and early-to-mid Noughties when I was at Shell, I did a lot of work with the PDI consultancy, Personnel Decisions International. We were introducing a coaching style of leadership into my parts of Shell at the time and so we rolled out their Coaching for Performance training.

More importantly though, PDI were in collaboration with Shell, developing and running the Development Centres for very senior leaders. I attended many of these as an internal assessor and coach. The design was such that the internal Shell assessor/coach was teamed up with a PDI (external) consultant for the two days.

It was incredibly hard work but I really enjoyed it, which is why I was did so many, often filling in for other executives who should have been an assessor but had cancelled. It not only kept my observation, feedback and coaching skills finely honed, but by working closely with so many different PDI consultants I learned something new from each of them every time. Which made me both a better leader and, for the last ten years, a much better executive coach and consultant.

One of the PDI tools that I have used time and time again since the 90s, in both the original English but also translated by myself into Dutch and Russian, is GAPS.

It looks like a simple, single piece of paper with an empty 2×2 matrix on it, but GAPS is such a powerful and useful concept that it has stood the test of time.

The top two on the matrix (Abilities & Goals/Values) are the person’s view. The bottom two (Perceptions and Standards) are the views of others.

Abilities are therefore what the person believes they can do. Perceptions are how others see them.

Goals and Values are what the person wants to do, what matters to them. And Standards are what the organization (or others) expect from them. The success factors for them to be successful.

I’ve used two of the questions time and time again to help stimulate people thinking: ‘Where can you offer your expertise to others?’ and ‘In what areas do others turn to you as a resource, or for assistance?’

The benefit of filling in a GAPS grid is that it highlights the possible areas for development, allowing one to focus on the most important gaps that would lead to success. Thereby facilitating the drawing up of well-defined development plans that will make the biggest difference.

GAPS recognizes strengths (not just ‘weaknesses’) and obviously supports the coaching and development discussion in general and about the four GAPS areas in particular.

I also like the way that developmental gaps (opportunities) can actually be between any two of the four quadrants. Between your abilities and what the organization wants is the most straightforward. But discrepancies between what you think you can do and what others think you can do could also lead to a different sort of development plan. And if what you want (Goals and Values) is very different to Standards (how to be successful) within your current company, then the plan might be to start looking for another employer more in line with your goals and values.

But in most cases the GAPS analysis leads to a focused development plan for the person and their company.

It looks deceptively simple but the GAPS matrix can be used for all levels of people and facing different challenges. Whether recently promoted or hired into new positions or new companies, or people wanting to further their career from their current job.

At the Shell Development Centres, the one-pager was the plan for the highest levels with potential to get to the very top. I’ve used it in other companies for CEOs, EVPs, VPs and Directors.

But it is also ideal for much younger and less experienced staff to help them decide where to concentrate their development efforts.

And I’ve even used it with good friends outside of a company structure, to help them decide what they wanted to do with their (working) life.

Since I worked with them, PDI became PDI Ninth House and is now part of Korn Ferry. However GAPS (and their other tools) are still available, albeit slightly updated. PDI was a great company and I’ve stayed in (remote!) contact with a number of their coaches with whom I worked and have fond memories of the work we did together.

My thanks to them for sharing the GAPS tool with me, also on behalf of the many, many people with whom I have used the tool since. 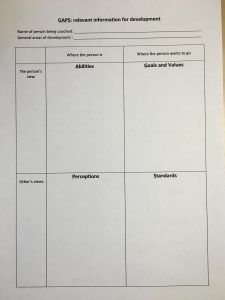 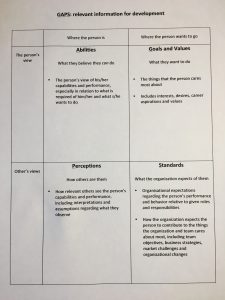 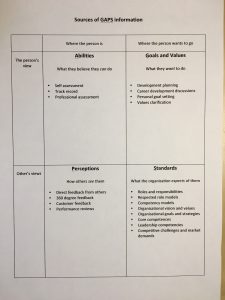 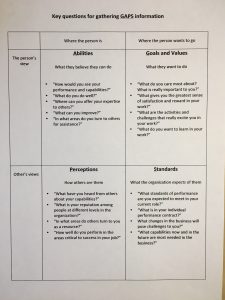 A short exercise on change and change management

The Leadership Qualities of Positivity and Optimism

The rediscovery of peer-to-peer expat support

Factors in choosing a new location for a shared service centre